American Griots, the new album by Louis York, comes out today. I had a chance to review the album and speak with the band earlier in the week and had some great takeaways. This is the band’s first full length album and it is a masterpiece of cinematic artisanship. Every song on the album is different and special. While listening to the album, I couldn’t help but conjure visions of movies that have yet to be created. 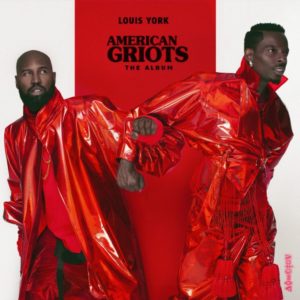 The duo originally hails from two completely different parts of the United States. Claude Kelly (vocals) was born and raised in New York City, while Chuck Harmony (keyboards, guitars, and drums) grew up in East St Louis. The pair met during their time working in the music industry as songwriters and would frequently travel between New York and LA. While they had successful careers writing and co-writing for artists such as Britney Spears, Bruno Mars, and Miley Cyrus, they still felt like something was missing. They needed to write for themselves and create heartfelt music.

It was about four years ago when the duo decided that they had enough of traveling back and forth. They wanted to build a permanent foundation in a city that felt like home. One day on a trip to LA they made a list of places that they would like to visit and explore. The first place on their list was Music City USA Nashville, Tennessee. They decided to divert their trip back to New York with a stop in Nashville. Immediately they fell in love with the people and the surroundings that only Nashville can provide. It was on this first trip that they decided to make Nashville their new home. Since being there they have set up their label Weirdo Workshop which includes the sui generis all-female group The Shindellas.

With the new album, Louis York wanted to push the envelope a bit and include music that is somewhat looked over in the current state of mainstream media. A great example of this is the song “I Wonder.” The song starts with the simple sound of a piano and a violin. The violin quickly gives way to a chorus of humming while the piano remains. The sound is very reminiscent of a gospel choir. This then leads into frontman Patrick Dailey singing dramatically and soulfully, ” I wonder if Martin is alive now, would he be proud?” Just as you start to focus on him, the sounds of the gospel choir gracefully flow back in… But, as quickly as they come they dissipate. Out of nowhere comes this angelic operatic voice that completely catches you off guard. As if this wasn’t enough an entirely new layer is added to this intricately interlaced song. Caroline Randall Williams comes in with some deeply moving spoken word. When I asked Louis York about this song they stated that “We believe that so many different musical textures are missing from the landscape of popular music.” With this song, they manage to interweave all of these outstanding musical elements into one song. To be honest this is the one song on the album that totally caught me off guard.

Another noteworthy track is “Teach me a Song” featuring country singer Jimmy Allen. While I wouldn’t consider this a country song, it most definitely has country elements or a hint of “twang” if you will. This speaks volumes of the diversity of this album. It is not only a nod to Nashville’s country roots but it’s also to the community and Southern hospitality that the south creates. When I questioned the duo about having Jimmy on one of their tracks they mentioned that they had originally met him at the gym. This was before Jimmy became a household name. However, over that time they became closer and remained friends. So when it came time to create a new album, they wanted him to come along for the ride.

“How Will I feel” is my favorite song on the album. It’s a ballad that reflects the personal journey that the band was going through concerning the terms of making the most of opportunities, and putting themselves out there as artists. My first thought upon listening to the song was that it would make a great duet. It’s theme is relatable, being about taking time and living in the moment and enjoying life. It’s interesting because the song plays as if it is about a relationship, but at the same time the underlying tone can absolutely be about one’s career and taking the chances necessary to succeed.

The last song I asked the band about was “No Regrets.” The hook of the song is “Have fun with no regrets,” so of course, I had to know if this was just a song or a life motto? They replied with an enthusiastic “That’s our life motto for sure. That’s the kind of message that we want the world to remember us for. We want the world to know that you don’t have to be alone, you don’t have long in this world, just have fun.” This comes through in their music, that they are pushing the envelope in creating an album with such a diverse sense of musical style.